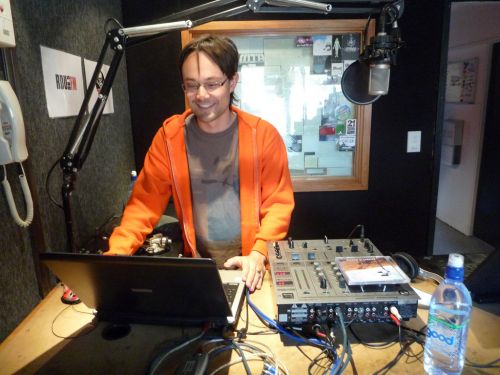 AudioMulch users may recognize Michael Upton as the guy who created the "MulchOnly" patches that ship with AudioMulch's suite of examples. Electronic music fans may know him better as Jet Jaguar.

We talked to Michael about his music and along the way we discovered some advanced ideas for patch design in AudioMulch.

You've been composing and performing for a while now. How did you first get into making music?

I started out with a MIDI setup and a multi-timbral synth, towards the end of 1992. I saw a school friend's setup and was sufficiently impressed that I saved up for my own. I was into synthpop and industrial stuff at the time and getting more into dance music and hip-hop as well. I felt like I really got “serious” when I got a decent sampler and started writing tracks pretty much entirely using that. I'd sometimes sample synthlines I'd written and chop them up in the sampler; other times I'd sample a single tone and use the sampler's envelopes, filters and so on to build up my own instruments. My first CD was done before I even had an OK soundcard on my PC - all the sounds came directly from my sampler - so I had a very hardware-based way of working.

When did you first discover AudioMulch?

I was introduced to Mulch by a friend, Shanan Holm, and started using it for my solo gigs in maybe 2002. I started making loops out of components of tracks I had written with sampler and sequencer – I loaded them into Loop Players, File Players, and so on, and then worked out what I could do to make this enjoyable to work with. A lot of the time I was just muting and un-muting Loop Players and messing with Matrix Mixers. I found using Mulch heaps more flexible and fun than trying to do something with my hardware setup.

I started collaborating with Shanan under the name Montano. We decided to work with Mulch, since we both used it and could swap files easily. That really cemented my course away from using hardware and soon enough I was using Mulch for writing new solo material as well.

Can you tell us about your recent projects? And what are you working on at the moment?

I've always released my solo music and any remix work I've done under the name Jet Jaguar. It’s very laid-back, down-tempo instrumental electronic music and most of it has fairly strong hip-hop influences in the rhythms but I’m fairly obsessed with interesting textures too. It's pretty poppy, at least inasmuch as I work with obvious rhythms, and the harmonic stuff normally sticks to pretty trad progressions and chords. I've done five or six remixes now using Mulch, which has been slightly strange but generally fruitful!

In the last few years I've put a lot of time into a project called Malty Media with a friend Stuart McDonald. We both use Mulch and did a radio show where we played tracks we'd prepared alongside other people's music, some bootleg remixes and ambient mutations of junk we dragged off Youtube or wherever. As well as podcasting the proceedings, we also picked out the bits of the shows that could bear repeat listening and swapped the Mulch files back and forth until we had something worth releasing. Now Stuart's travelling so the show is on hiatus, but we are intending to wrap up a few more EPs of our favourite moments.

Shanan and I still do our Montano stuff sometimes. A few years back we did a CD that was based around making field recordings and then writing music using only sounds from those. More recently we've been cannibalising those tracks to make something new, where time allows. We’ve just started some new recordings to make more stuff.

A radio show where you jam with AudioMulch? Tell us more.

Each show was a combination of a few things.

First, we'd DJ other people's tracks. This was often just via whatever music playing software we had on our respective laptops, but I often used Mulch to do even this bit. I ripped songs to WAV before each show and would load them into a FilePlayer. I had a very basic patch I reused where I could use a couple of filter VSTs to chop the top or bottom off what I was playing, then used a Matrix Mixer to give me the option of bouncing that through some fairly generic dub effects. It was handy for transitions as well as for getting silly with chunks of old TV dialogue, jingles and similar.

Second, we had some prepared loops and riffs and beats that we jammed with live and mixed around to suit whatever was happening before or after. Stu did this more than me, as he's got a MIDI controller he could exploit. I always intended to get stuck into the Metasurface more for my own efforts in this regard, but tended to work so often with Loop Player mutes that I never made the jump.

Third, we had complete "originals" where we'd used automation to structure out a track. In reality we could easily have aired these as exported WAV files, but it was good to be able to crank the volume on something or fade it out or insert an EQ.

There are lots of AudioMulch users out there who practically never use AudioMulch's automation timeline feature, especially in live performance. Clearly you do though. What do you use automation for and how do you use it?

At home I use automation to structure out tracks. Everything I've written in the last 3 or 4 years has been done like that and will sound essentially the same each time I open Mulch and hit play.

Live, I use automation for a variety of things. I often set up automation on a bunch of parameters, making shapes like LFOs and so on, but save the document with those automation lanes muted. When I go to perform the track live I use the automation mute to trigger those changes for as long as I want.

I also draw in automation freehand while playing, sometimes. A typical example would be if I want to to add a slow fade while I'm switching between tracks. I often switch between a couple of instances of Mulch when I'm playing out, which may or may not be a crazy way to work. It suits me. So sometimes I'll automate either a master gain or a filter cutoff frequency that I can use to sweep the track into silence. I'll skip ahead to a future point in the timeline and draw in the change I want. It's fast and easy … and with practice it even works!

I also like using automation and looping to set up A and B sections of a track. I might have a bunch of contraptions where preset 1 is the main bit of the track and preset 2 is the second bit. I’ll automate preset changes on those contraptions so that they all change at the same time, say after 16 bars. Then I switch on looping, so when I start the track it only plays the first 16 bars. In other words, while the track is looping it never reaches the point where all those preset changes take place. When I want to move to the second section I switch off the loop and let the bar counter tick over to bar 17. Then I can continue manipulating stuff for as long as I want the track to last.

You were one of the people who requested that Ross add MIDI routing to AudioMulch 2.0. How do you use MIDI in your patches?

I use MIDI to write melodies and harmonies at home. I do work with Mulch's signal generating contraptions a lot, but coming from a background of years of MIDI sequencing and almost never touching an instrument, I've found being able to bust out a piano roll and sequence some phrases for further mulching a fruitful way to work.

I use a thing called Phrazor, which is a DAW-style sequencing environment that runs as a VST and can either host other instruments within itself or send MIDI out. With version 1 of Mulch I used to do the former – add Phrazor to the patcher, then load up the VST instruments I wanted to work with inside Phrazor.

With Mulch 2.0 I've been loading up VST instruments as separate contraptions in Mulch and using Phrazor (still in the patcher as a contraption) to send MIDI to them. I can use Mulch's super-easy parameter control to manipulate the sounds of the VSTis over the course of a track, which seems like a huge benefit to me.

In Mulch 1.0 I used to sequence a lot of beats and rhythmic patterns of samples in Phrazor too, but have found the new features in the Drums contraption allow me to achieve a lot more of what I want there. I use Drums about equally with percussive and non-percussive sounds.

Any favourite VST plugins aside from Phrazor?

What would you say are some of your personal or signature AudioMulch techniques?

Use a couple of instances of DLGranulator to build up chords. For example, I might write a line on an Arpeggiator and send that to two different DLGranulators. I’d treat the clean output of the Arpeggiator as the root and then set the transpose amount on the two DLGranulators to provide something like a third and a fifth. I’d then automate the transpose to make gradual sweeps to different chords. As well as the unique character of the granulator's sound, it's handy to be able to make portamento or slide effects over whatever time period you like and to retain at least some of the character of the original sound being "chorded". Admittedly the latter’s more interesting if you’re working with something like a voice or a bird rather than an Arpeggiator.

When Shanan and I were writing material for our Montano album we would make melodies with a Loop Player. You switch stretch on and calculate different bar lengths for different pitches, so if 1.0 bar is your root note, 2 semitones up would be 0.89 bars, and so on. It’s easy to get a starting sound with the tuning you want by messing with the bar length til it’s the pitch you want, then using Mulch’s timed export function to export exactly 1 bar.

I use SDelay contraptions a lot. One simple example is for making stereo space. The simplest version of this would be to set feedback to zero, mix to about 30% and left and right delay times to something small but different, e.g. 30ms and 40ms. I often send an output to an EQ and strip out the bass, then put that through the delay, leaving the non-equalised version in mono.

SDelays plus a Matrix Mixer and automation can create either variable length delays or a sample-and-hold setup. This is a lot easier to just demonstrate than to explain, but both cases involve a string of SDelay contraptions going into a Matrix Mixer. I setup presets on the Matrix Mixer to let through different length delays, and then automate the preset changes.

Learn how people use AudioMulch to make music...

Gregg Gillis, a.k.a. Girl Talk shares his approach to live performance with AudioMulch.

Erdem Helvacioglu talks about some of the techniques behind his music...

Michael Upton a.k.a. Jet Jaguar talks about his projects and gives us some expert AudioMulch tips.

Andrew Tuttle discusses the computer as instrument and the central role AudioMulch plays in his music.